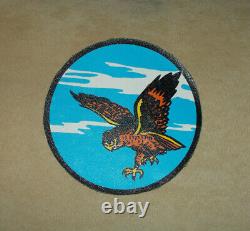 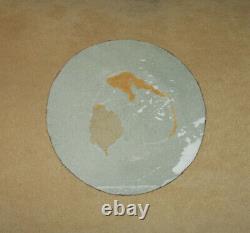 This patch was not sewn on a leather A-2 bomber jacket, but was used in a display, personal album or a scrap book judging from the reverse side of the patch. 7TH BOMBARDMENT SQUADRON, 34TH BOMBARDMENT GROUP, 8TH AIR FORCE.

"The squadron was activated at Langley Field, Virginia in January 1941 as the 7th Bombardment Squadron, one of the original squadrons of the 34th Bombardment Group and equipped with a mixture of B-17C and B-17D "Flying Fortresses" and Douglas B-18 "Bolos. Along with the 34th Group, the squadron moved to Westover Field, Massachusetts four months after they were activated. After the attach on Pearl Harbor the squadron began antisubmarine patrols off the Northeast coast of the United States, but soon became part of Western Defense Command and moved to Pendleton Field, Oregon. By the summer of 1942, Second Air Force had become primarily a heavy bomber training force and the squadron became a B-17 Replacement Training Unit (RTU) at Geiger Field.

RTUs were oversized units which trained aircrews prior to their deployment to combat theaters. On December 15, 1942 the squadron moved to Blythe Army Air Base, California a base of the Desert Training Center.

The unit provided cadres for a number of heavy bomber units that served with Eighth Air Force (8 AF) during this period. The 7th began training with Consolidated B-24 "Liberators" for overseas combat operations on January 5, 1944.

Its ground echelon moved to the port of embarkation on 1 April 1944, while the air echelon began its overseas movement on 31 May 1944, taking the southern ferry route, from Florida to Trinidad, Brazil, West Africa and Marrakesh arriving at RAF Valley, Wales. The squadron arrived at its permanent station, RAF Mendlesham, England, in April 1944 and entered combat on May 23, 1944.

The squadron helped to prepare for Operation Overlord, the invasion of Normandy, by bombing airfields in France and Germany, and supported the June landings by attacking coastal defenses and communications. It supported ground forces at Saint-Lo in late July and struck V-1 "Flying Bomb" launch sites, gun emplacements, and supply lines throughout the summer of 1944.

The mixture of B-24s and B-17s in the 3d Bombardment Division presented a number of operational problems, and in early 1944 plans had begun at VIII Bomber Command headquarters to standardize the division with the Flying Fortress. The 34th Group flew its last B-24 mission on 24 August 1944.

It transferred its Liberators for overhaul and eventual transfer to units of the 2nd Bombardment Division, and and began converting to B-17s. It flew its first mission with the new planes on September 17, 1944. The squadron engaged primarily in bombardment of strategic objectives from October 1944 to February 1945. Targets included marshaling yards in Ludwigshafen, Hamm, Osnabruck and Darmstadt; oil centers in Bielefeld, Merseburg, Hamburg and Misburg; factories in Berlin, Dalteln, and Hanover; and airfields in Munster, Neumunster and Frankfurt. During this period the squadron also supported ground forces during the Battle of the Bulge from December 1944 to January 1945. In March 1945, with few enemy industrial targets remaining and with Allied armies advancing across Germany, the 7th turned almost solely to interdicting enemy communications and supporting Allied ground forces.

The 7th flew its last combat mission on 20 April 1945. A great patch to have for your 7th Bombardment Squadron, 34th Bombardment Group, 8th Air Force, B-26 "Liberator, " B-17 "Flying Fortress, ". Mendlesham RAF, England or US Army Air Forces World War II-era collection! Please check my other listings for great patches. This item is in the category "Collectibles\Militaria\WW II (1939-45)\Original Period Items\United States\Patches".