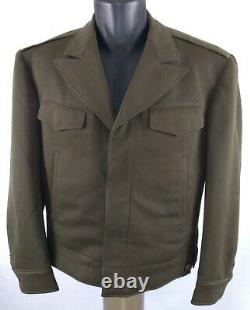 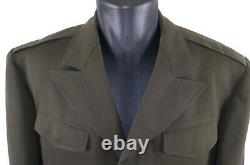 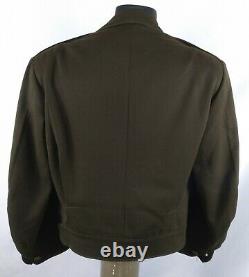 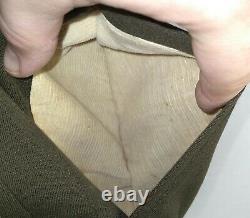 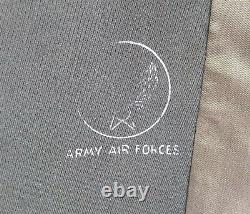 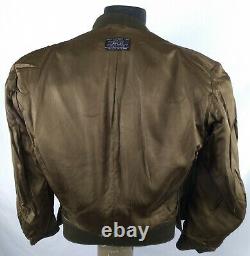 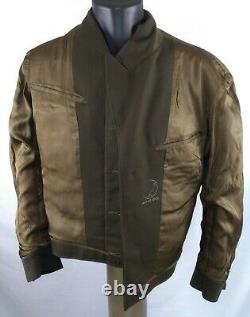 The Type B-13 Flight Jacket, standardized in March of 1944, was in large part inspired by British-made officer's jackets, to which were added two inset breast pockets with apparent flap. As its designation indicates, this jacket was designed for flying. The large shoulder straps, slash pockets, and various flaps for concealing the buttons, were intended to help with the wearing of a parachute harness. Manufactured until 1945, it was soon replaced by the universal issue Wool, Field Jacket, M-1944 ("Ike" jacket) for walking out. The example featured here was manufactured by Ben Greenholtz & Co, who was one of the few contractors to produce this jacket. What's especially nice about this example is that it is a large size 40, which is rare to find in itself. The largest size that this model was available in was a size 42, making a size 40 the SECOND largest size that was available. These were often preferred to be worn as part of the "walking out" uniform, as opposed to being worn as a traditional flight jacket.

You can see evidence of insignia having been pinned to the breast, as well as the imprint of clutches on the inside of the jacket. The slash pockets are lined in cream colored corduroy, and the inside of the body is fully lined. We can see a few areas where threads were pulled, as well as a few areas of insect damage - but overall this is a fantastic jacket that displays very well. For every 100 A-2 flight jackets, you will find one B-13. A scarce jacket in a very desirable size.

The only provenance that I have is that this came from the estate of a 9th Army Air Force pilot (based on other items at the estate sale). There are no names or serial numbers inside the jacket.

The uniform remains in very good condition, showing signs of age, use, and wear. Minor insect damage or pulls to the fabric is evident, but overall a very nice looking uniform. Evidence of insignia having been on the uniform is evident.

Please see the pictures for more detail. Guaranteed 100% authentic in every respect for life. Be sure to see my other listings for more historical antiques and militaria. Be sure to follow our store as new inventory is added daily. The item "World War II B-13 Flight Jacket Size 40 WWII WW2 Army Air Force AAF" is in sale since Thursday, October 7, 2021. This item is in the category "Collectibles\Militaria\WW II (1939-45)\Original Period Items\United States\Uniforms". The seller is "historical_antiques" and is located in Greenville, Pennsylvania. This item can be shipped to United States.