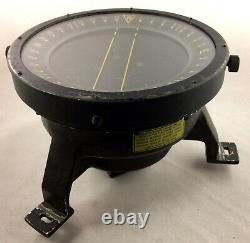 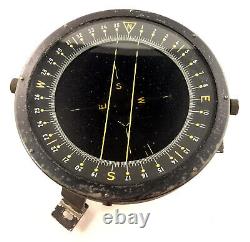 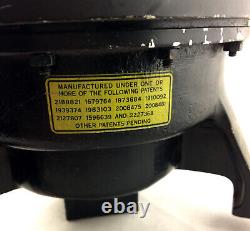 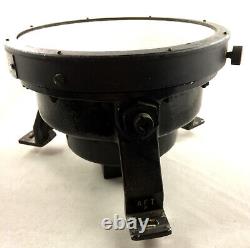 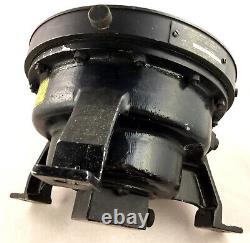 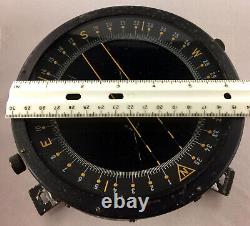 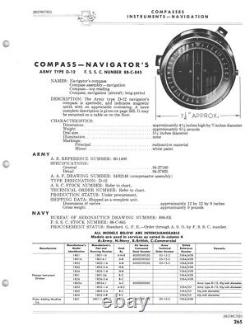 Bendix Compass, Aperiodic, US Army Air Force Type D-12 ORDER NO. AF-42-12847 BENDIX AVIATION CORPORATION PIONEER INSTRUMENT DIVISION BENDIX, NEW JERSEY, U. DESCRIPTION: The US Army Air Force Type D-12 Direct Reading Aperiodic Compass was used at the navigators station across many US WWII aircraft, including heavy bombers B-17, B-24, B-29, medium bombers B-25 and B-26, and transports C-46, C-47, and C-54. Made by Bendix, part number 1833-1-A, it has a serial number prefix of AF-42, indicative of a manufacturing year 1942. Later versions had a bakelite cover surrounding the'legs'.

Radial arms or vanes attached to the card dampen the swing of the needle. This type of compass is mounted horizontally, and is read through a glass cover on the top. The compass consists primarily of a cylindrical metal bowl filled with compass fluid.

In the center of the bowl is a semi-float type card to which are attached the magnetized needles and the radial arms. The card is marked with the four cardinal points, with an arrow indicating North. Inside the bowl, a fixed mark acts as the lubber's line.

A graduated rotatable ring (verge), with two clamping screws, is fastened to the upper edge of the compass bowl. Across the inside of the ring are two horizontal, parallel white wires, spaced equally on either side of the N and S markings. In making readings, the ring is turned until the two white wires are parallel to the North-South lines on the card. The airplane heading is read as the marking on the ring which is directly above the lubber's line.

A box containing magnets which may be turned to compensate for deviation is located on the bottom of the compass. This compass still contains clear fluid, the glass is intact and the markings are sharp. It is an excellent example given its 80-year-old age.

Measures: 6.5" Diameter 5.0" Height. This item is in the category "Collectibles\Militaria\WW II (1939-45)\Original Period Items\United States\Field Gear, Equipment". The seller is "phantom_50" and is located in this country: US. This item can be shipped to United States.