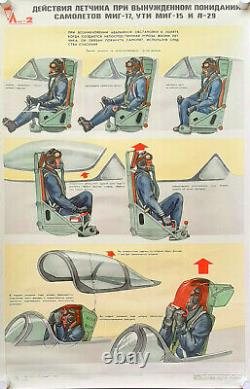 Original slogan on the poster. ACTIONS OF THE PILOT DURING THE FORCED LEAVING OF THE MIG-17 AIRCRAFT, UTI MIG-15 AND L-29.

IN: 22 ½ x 35 = CM: 57 x 88. The poster is getting from the posters set: " FORCED PARACHUTE JUMPING FROM AIRPLANES, HELICOPTERS AND GLIDERS FOR THE PILOTS " MiG-17 Russian:?????? 17; NATO reporting name: Fresco is a high-subsonic fighter aircraft produced in the USSR from 1952 and operated by numerous air forces in many variants. It is an advanced development of the similar looking MiG-15 of the Korean War. The MiG-17 was license-built in China as the Shenyang J-5 and Poland as the PZL-Mielec Lim-6.

MiG-17s first saw combat in 1958 in the Second Taiwan Strait Crisis and later proved to be an effective threat against more modern supersonic fighters of the United States in the Vietnam War. It was also briefly known as the Type 38 by U. Air Force designation prior to the development of NATO codes.

15; USAF/DoD designation: Type 14; NATO reporting name: Fagot is a jet fighter aircraft developed by Mikoyan-Gurevich for the Soviet Union. The MiG-15 was one of the first successful jet fighters to incorporate swept wings to achieve high transonic speeds. In combat over Korea, it outclassed straight-winged jet day fighters, which were largely relegated to ground-attack roles, and was quickly countered by the similar American swept-wing North American F-86 Sabre. It is the country's first locally designed and constructed jet aircraft, as well as likely being the biggest aircraft industrial programme to take place in any of the Council for Mutual Economic Assistance (COMECON) countries except the Soviet Union Highly rare and hard to find Soviet aviation poster marked as: FOR INTERDEPARTMENTAL SALE ONLY. This item is in the category "Art\Art Posters".

posters" and is located in this country: UA. This item can be shipped worldwide.